17 Things You Should Stop Doing on Social Media

Social media can be a great way to grow your business and drive traffic to your website. That is when done correctly. With so much information out there, it can be overwhelming to know what to do, how to do it and when to do it. But I think we can all agree that there a some things that we should just not do ever. These rules are just kind of obvious and there isn’t anything that officially says you shouldn’t be doing them, but if you are serious about stepping up your social media game, I’d advise you not to.

Today I’m sharing with you my unspoken don’ts of social media and sharing 17 things you should stop doing on social media if you’re an entrepreneur.

*This post may contain affiliate links, which means I may receive a small commission, at no cost to you, if you make a purchase through a link!* 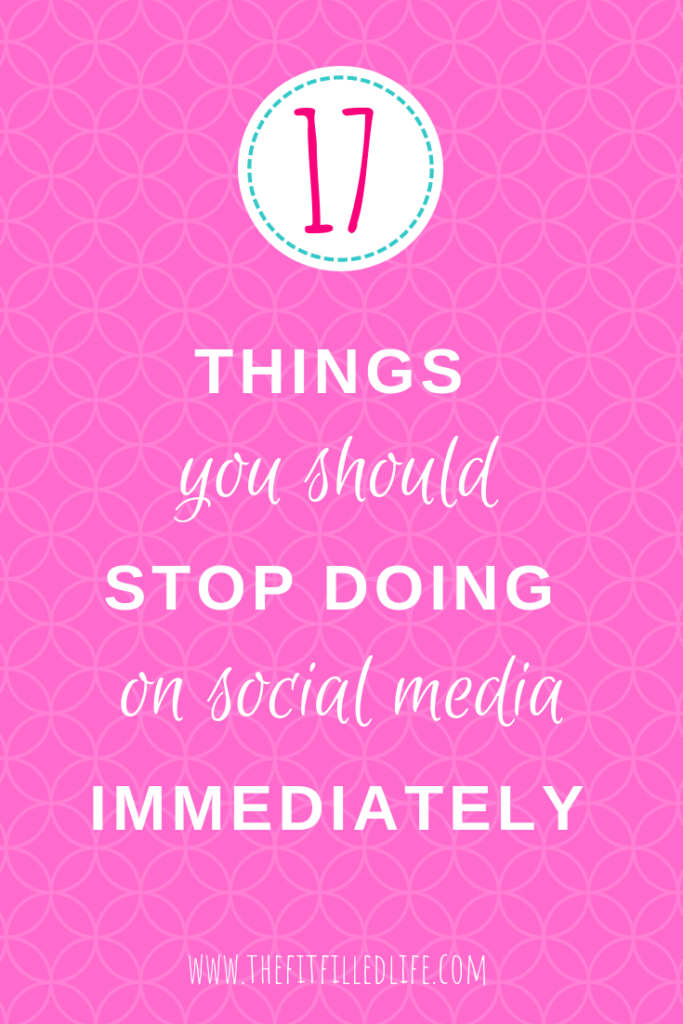 17 Things You Should Stop Doing on Social Media

1. Only Making Posts With Photos

Things like studies or informational articles bring in more viewers than a picture of your headquarters that is decorated for the holidays. Social media is designed for companies to be social, not to be a bulletin board or picture gallery.

Don’t be someone who only shares their own content – nobody likes that person. You’ll fare better in the long run if you make it a habit to share both yours and others content.

This one I just don’t understand. If you are serious about growing a following, you’re doing yourself a huge disservice when you keep your social media profiles private. People are less likely to follow you if they don’t know what to expect from you beforehand. Also, if you get an influx of followers you’ll have to take time to approve or deny each follower and that would get old really fast.

Unfortunately, you most likely know someone who has done this but I advise you not to partake in it in efforts to keep up with the Joneses. When you buy likes or followers, they won’t be engaged so you’ll have an inflated following but your engagement won’t increase so it’s basically pointless. Plus, it can land you in social media jail! Just Don’t Do It.

Can I get an amen if you hate auto direct messages on Twitter? I haven’t been a fan since my early days on Twitter before I even ventured into the blogosphere but my hatred has grown even more since then. Although they can be effective on the rare occasion, you’ll most likely just annoy people so I’d recommend not using any auto DM feature if possible.

6. Not engaging with your audience

This is something that I see happen so often. People will just set up automation and then run away. It’s great that they are posting frequently but that’s only half of the battle. To really make an impact on social media, you also need to engage with your audience by responding to comments and interacting with your followers.

7. Posting just for the sake of posting

You are shooting yourself in the foot if you’re not utilizing your optimal post times. You need to be posting when people are online. If you post something randomly at 2 am when no one is even online, it isn’t going to be worth it because it won’t get seen.

9. Not catering your content to each social media platform

I’ve seen so many people just post the exact same message on every social media channel they have and it just isn’t effective. Your message needs to be tailored to each different social media channel. I know it’s a pain, but make sure you are creating the correct size images for each platform. I use Canva to make this task easier.

10. Forgetting to double check before posting

Double checking prior to sending out your post is certainly necessary. This can help you avoid any grammatical or spelling errors. Or the biggest mistake of them all ***a dead link***!  I’m sure we have all forgotten to do this before, but what’s the point of posting if you aren’t leading them somewhere!

11. Not keeping track of your growth

When you don’t keep track of your growth, you are unable to see how far you have come. I think it’s important to track your growth each month so you can tweak your strategies if needed. I have a great tracker for you in my resource library, download it here for free!

12. Using bots to auto comment on any social media

This is probably one of my biggest social media pet peeves. Using bots is not only not effective but it also looks extremely spammy and really irritates people. I have seen so many people drop a random heart or thumbs up emoji or “love this” comment on an extremely sad post. Don’t forget these are real people. Take the same that you care and really interact with them.

13. Not giving credit when you use someone else’s photos

If you’re going to share someone else’s photos, at least give them credit for it. Or better yet, ask their permission. They worked hard on their content. and who knows, maybe they will share some of your content to return the favor.

14. Oversharing every aspect of your day

Nobody cares! Back in the day when Facebook first became popular, people were consistently sharing every little part of their day no matter how mundane it was. Doing that as a blogger or business owner is not necessary. While you should definitely share some aspects of your day so that you can show your followers that you’re a real person, it is not necessary to over-share.

I don’t know about you but when I receive comments like “thanks for sharing” on social media and my blog, I have to stop myself from rolling my eyes. It’s a clear indication that the person couldn’t take 5 seconds to at least skim through my post and find something to comment on. Not only is it lazy but it doesn’t reflect well on you as the poster either.

Using irrelevant hashtags is not going to help you in the long run. Sure, if you use hashtags like #like4like or #share4share you might reach a wider audience for a little bit but they are not going to be the target audience that you’re looking to reach so your efforts will be wasted.

17. Focusing on the Wrong Numbers

When looking at numbers on social media do not just focus on the number of followers you have on the platforms. Instead, look deeper, into engagement rates, click thru rates, and the number of shares that you get.

You could have 50,000 followers but if they are not engaging with you on social media, it is going to provide you the same results as if you have 1000 followers.

Therefore, it is suggested that you look at your stats; they tell you so much more about your social media marketing strategy anyway.

Are you guilty of doing one of the 18 things that we discussed today?

Awesome! Check your email to get started!!!

You are also subscribing to The FitFilled Life newsletter for tips, updates & promotions.

This site uses Akismet to reduce spam. Learn how your comment data is processed.

Have you always dreamed of starting your own blog or online business, but have no idea where to begin. This step-by-step guide will get you up and running in a matter of minutes!

SIMPLE AND FUN GOAL SETTING STRATEGIES TO CREATE YOUR MOST SPECTACULAR YEAR EVER!

Almost done! Check your email for your Checklist!

I'm adding new and exciting Freebies on a weekly basis so join now to have INSTANT ACCESS!

Join our Social Media Images Club and get 5 new images every month, perfect for filling your content calendar and boosing engagement.